Designed to help you transform your products and services

We can provide your business with the same standards we use in-house, to help improve your team or to augment the skills you already have

We deliver a range of software development services, from responsive websites and mobile solutions to advanced API applications and bespoke projects

We can design and install solutions for Premium Home and Small Business, and support any remote management needs you have

MDA Renewables specialise in finding suitable locations and obtaining planning permissions for on-shore wind and solar installations. They also operate and manage some of their own turbines in South Wales.

Large wind farms generally run SCADA monitoring systems which is often price prohibitive for small and single installations. We were asked to come up with a solution for excessive downtime on a particularly remote turbine in one of the Welsh Valleys during its initial 'teething' period, which would often stop functioning and lose significant periods of available energy generation. 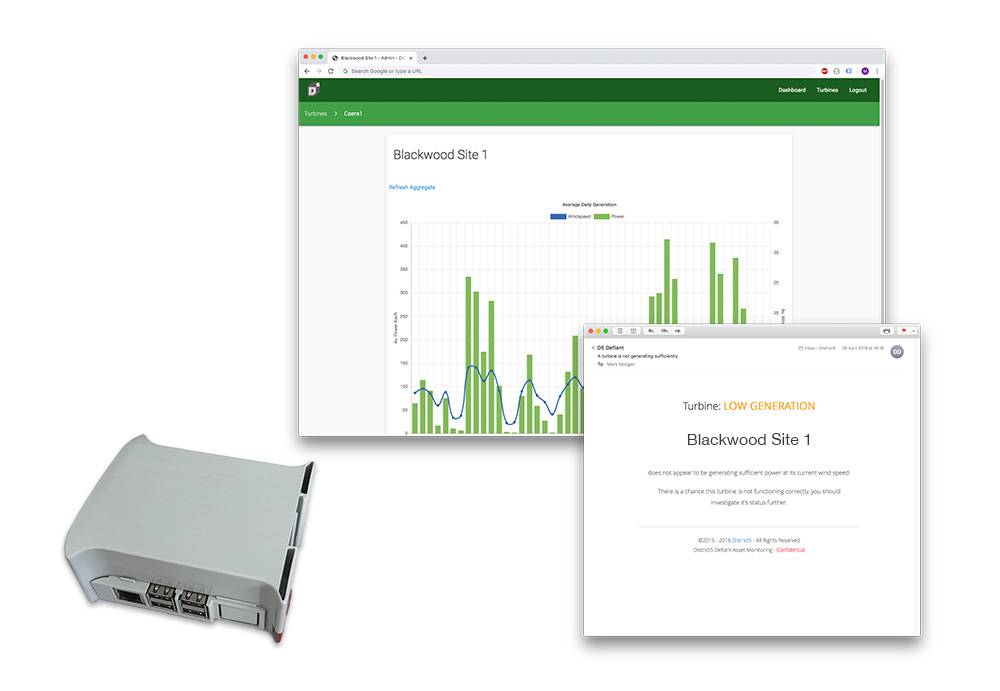 After exploring various options, a 2 part system was chosen. We decided to program a small embedded device to sit at the turbine, and a set of API's to receive and process data in the cloud. The turbine had a small LAN in the control housing for various monitoring and remote access systems so we worked with the suppliers of the turbine to expose some read-only items related to the health and generating state of the machine on the LAN.

We used one of the team's favourite 'Made in Wales' products, a Raspberry Pi, for the embedded device, coupled with a Windows 10 IoT Core operating system. This was chosen for ease of programming, low cost and ability to replace without too much technical knowledge in case of a hardware failure. The device gathers data from the turbine at set intervals, collates, and then transmits it to the API's at larger intervals.

The API's store the data and aggregate daily figures. If a turbine indicates there is windspeed to allow generation to occur, but no power is being generated, stakeholders are contacted automatically. If a turbine misses more than 1 data submission window, stakeholders are again contacted, providing a dead man switch system to a total system failure in the control housing.

This system has transformed the generating abilities of the turbine and allowed tricky teething issues to be diagnosed as soon as they occur, and fixed with software or hardware upgrades.